Trouble in fandom paradise: Tumblr users lash out against its beta subscription feature

The Tumblr community often refers to itself as the Wild West of the internet, and they’re not wrong. A text post with over 70,000 notes puts it best: “Tumblr is my favorite social media site because this place is literally uninhabitable for celebrities. No verification system, no algorithm that boosts their posts, it’s a completely lawless wasteland for them.”

But like any social media company, Tumblr needs to keep itself afloat in order for its users to continue sharing esoteric fan art, incomprehensible shitposts, and overly personal diary entries hidden beneath a “Read More” button. Yesterday, Tumblr announced the limited beta test of its Post+ subscription feature, which — if all goes as planned — will eventually let Tumblr users post paywalled content to subscribers that pay them $3.99, $5.99 or $9.99 per month.

Tumblr is far from the first social media platform to seek revenue this way — Twitter is rolling out Super Follows and a Tip Jar feature, and this week, YouTube announced a tipping feature too. Even Instagram is working on its own version of Twitter’s Super Follows that would let users create “exclusive stories.” But on a website with a community that prides itself as being a “completely lawless wasteland” for anyone with a platform (save for Wil Wheaton and Neil Gaiman, who are simply just vibing), the move toward paywalled content was not welcomed with open arms.

Monetization is a double-edged sword. It’s not considered uncool for a Tumblr artist to link to a third-party Patreon or Ko-fi site on their blog, where their most enthusiastic followers can access paywalled content or send them tips. So Post+ seems like an obvious way for Tumblr to generate revenue — instead of directing followers to other websites, they could build a way for fans to support creators on their own platform while taking a 5% cut. This isn’t unreasonable, considering that Twitter will take 3% revenue from its new monetization tools, while video-centric platforms like YouTube and Twitch take 30% and 50%, respectively. But Tumblr isn’t Twitter, or YouTube, or Twitch. Unlike other platforms, Tumblr doesn’t allow you to see other people’s follower counts, and no accounts are verified. It’s not as easy to tell whether the person behind a popular post has 100 followers or 100,000 followers, and the users prefer it that way. But Post+ changes that, giving bloggers an icon next to their username that resembles a Twitter blue check. 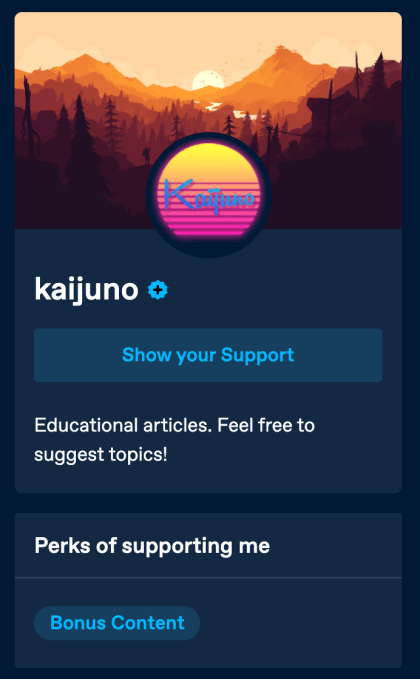 Tumblr rolled out Post+ this week to a select group of hand-picked creators, including Kaijuno, a writer and astrophysicist. The platform announced Post+ on a new blog specific to this product, rather than its established staff blog, which users know to check for big announcements. So, as the most public user who was granted access, the 24-year-old blogger was the target of violent backlash from angry Tumblrites who didn’t want to see their favorite social media site turn into a hypercapitalist hellscape. When Kaijuno received death threats for beta testing Post+, Tumblr’s staff intervened and condemned harassment against Post+ users.

“We want to hear about what you like, what you love, and what concerns you. Even if it’s not very nice. Tell us. We can take it,” Tumblr wrote on its staff blog. “What we won’t ever accept is the targeted harassment and threats these creators have endured since this afternoon. […] all they’re doing is testing out a feature.”

Before making their post, a representative from Tumblr’s staff reached out to Kaijuno directly to check in on them regarding the backlash, but there’s only so much that Tumblr can do after a user has already been threatened for using their product.

“I felt like the sacrificial lamb, because they didn’t announce Post+ beforehand and only gave it to a few people, which landed me in the crosshairs of a very pissed-off user base when I’m just trying to pay off medical bills by giving people the option to pay for content,” Kaijuno told TechCrunch. “I knew there’d be some backlash because users hate any sort of change to Tumblr, but I thought that the brunt of the backlash would be at the staff, and that the beta testers would be spared from most of it.”

Why do Tumblr users perceive monetization as such a threat? It’s not a question of whether or not it’s valuable to support creators, but rather, whether Tumblr is capable of hosting such a service. Multiple long-time, avid Tumblr users that spoke to TechCrunch referenced an incident in late 2020 when people’s blogs were being hacked by spam bots that posted incessant advertisements for a Ray-Ban Summer Sale.

“Tumblr is not the most well-coded website. It’s easy to break features,” Kaijuno added. “I think anything involving trusting Tumblr with your financial information would have gotten backlash.”

Tumblr users also worried about the implications Post+ could have on privacy — in the limited beta, Post+ users only have the ability to block people who are subscribed to their blog if they contact Tumblr support. In cases of harassment by a subscriber, this could leave a blogger vulnerable in a potentially dangerous situation.

“Ahead of our launch to all U.S.-based creators this fall, Post+ will allow creators to block subscribers directly,” a Tumblr spokesperson told TechCrunch.

Still, the Extremely Online Gen Z-ers who now make up 48% of Tumblr know that they can’t expect the platform to continue existing if it doesn’t pull in enough money to pay for its staff and server fees. In 2018, Tumblr lost almost one-third of its monthly page views after all NSFW content was banned — since then, the platform’s monthly traffic has remained relatively stagnant.

A former Tumblr employee told TechCrunch that the feature that became Post+ started out as a tip jar. But higher-ups at Tumblr — who do not work directly with the community — redirected the project to create a paywalled subscription product.

“I think a Tip Jar would be a massive improvement,” said the creator behind the Tumblr blog normal-horoscopes. Through the core audience they developed on Tumblr, they make a living via Patreon, but they don’t find Post+ compelling for their business. “External services [like Patreon] have more options, more benefits, better price points, and as a creator I get to choose how I present them to my audience.”

But a paywalled subscription service is different in the collective eyes of Tumblr. For a site that thrives on fandom, creators that make fan art and fanfiction worry that placing this derivative work behind a paywall — which Post+ encourages them to do — will land them in legal trouble. Even Archive of Our Own, a major fanfiction site, prohibits its users from linking to sites like Patreon or Ko-Fi.

“Built-in monetization attracts businesses, corporate accounts, people who are generally there to make money first and provide content second,” said normal-horoscopes. “It changes the culture of a platform.”

Across Tumblr, upset users are rallying for their followers to take Post+’s feedback survey to express their frustrations. The staff welcomes this.

“As with any new product launch, we expect our users to have a healthy discussion about how the feature will change the dynamics of how people use Tumblr,” a Tumblr spokesperson told TechCrunch. “Not all of this feedback will be positive, and that’s OK. Constructive criticism fuels how we create products and ultimately makes Tumblr a better place.”

Platforms like Reddit and Discord have remained afloat by selling digital goods, like coins to reward top posters, or special emojis. Each company’s financial needs are different, but Tumblr’s choice to monetize with Post+ highlights the company’s lack of insight into its own community’s wishes.