Targeted Advertising: A Simple Guide to Reaching Your Customers

Let’s face it: There’s quite a bit of negative sentiment around targeted advertising. It’s not unwarranted — consumers often complain that collecting information from their individual browsing behaviors, such as page visits and searches, to optimally select which advertisements they see, is invasive and, some might even say, “creepy.”

Done right, however, ad targeting has the potential to attract new customers, help retain existing ones and boost your brand profile. Here’s how.

Where Can You Publish Targeted Ads?

Brands have a host of options when it comes to publishing targeted ads. For customers that have opted-in to newsletters and offers, email is a great way to serve up advertisements to consumers that are already interested in your brand.

To reach a broader audience, meanwhile, marketers can pay for targeted advertisements to be shown on social platforms such as Facebook, Instagram, or TikTok.

Other options include publishing targeted ads in users’ Google search results or via the Google display network, which reaches 90% of Internet users worldwide. Both fall under the larger banner of Google Ads, and costs are based on an auction system. Marketers input the maximum amount per click they’re willing to pay for an ad, and Google then determines ad pricing and position based on overall ad quality and maximum bid. Worth noting? Brands are only charged when someone clicks through on your link.

So how do you put ad targeting to work for your business? Here are 10 best practices to boost your ad impact.

Instead of telling customers what they already know, use targeted ads as an opportunity to provide consumers with new information and other offers that might interest them based on their previous buying and browsing behaviors. Make it clear to your customers that you care about them by giving them content that is carefully targeted toward what they would want to see in an ad.

The reason they call marketing “creative” is because it should be exciting, attention-grabbing, and anything but boring. We all know that ads are easy to ignore, so for a targeted ad to perform well, it has to really stand out from the rest.

The takeaway: Make your ads eye-catching.

3. Set a Cap on Frequency

You need to remember that while proper ad targeting should provide a benefit to your customers, too much of it will most likely have the opposite effect. Consider the perspective of a consumer and think about how annoyed you would be if you were constantly served the same ad on dozens of different websites.

The takeaway: Don’t bombard your customers with ads.

Not every platform is the ideal place for your ads. While simple and streamlined ads make sense on Google search results, it’s worth taking the time to craft more intricate advertisements for Instagram or Facebook marketing campaigns that are more likely to see users stop on scrolling when they reach your ad and click through, either to a new page or to watch a video.

The key to any targeted advertisement is finding your target audience. If you’re serving up ads to customers that don’t match their preferences, you won’t see the click-through rates you’re looking for. As a result, it’s critical to do your research: Find tools that let you create custom ads based on personalized customer data and also help you see the bigger picture by identifying common traits among your audience.

The takeaway: Even the best ad won’t work on the wrong audience.

6. Don’t get too Specific

On the other side of the coin, it’s important to make your ads broad enough that they capture a decent segment of your target market. For example, while you could create an ad that specifically targets redheaded men between 20 and 22 living in Kansas who own golden retrievers and drive electric cars, the specificity of this ad is so high that it likely won’t show up on many social or search feeds and won’t capture a large enough audience share.

The takeaway: Effective marketing walks the line between targeted efforts and too-specific ads.

7. Think Outside the Box

Building targeted ad campaigns means thinking about what your audience wants. Let’s say you own a real estate company and you’re looking to help customers sell their current homes or buy new ones. Your obvious target market is people searching for realtors in their area or checking out the home prices in their neighborhood.

But it’s also worth considering parallel markets that are tied to your primary target. When it comes to real estate this might include searches for moving boxes, truck and van rentals, or storage lockers that could indicate customers are preparing to move. By thinking outside the box to include parallel markets, you can expand your reach without losing your focus.

The takeaway: Targeted marketing relies on both depth of personalization and breadth of interest.

Even the best-laid advertising efforts don’t always go to plan. As a result, it’s worth conducting regular A/B testing to see which ads perform the best in specific scenarios and which can’t keep pace. Once you’ve identified frontrunners, you can tweak them even more through ongoing A/B testing to get the best return on investment.

The takeaway: Nothing works perfectly the first time. Test your ads to improve their performance.

Chances are that one advertising platform will work best for a new ad campaign. The caveat? You won’t know which one until you try them all. While it’s not worth spending your entire ad budget to blanket the Internet with new marketing efforts, it’s worth dipping your toe into multiple ad platforms to see what sticks.

The takeaway: Wide nets let you find where customers are swimming and adjust tactics to match.

If ads are getting seen and clicks are coming in, then everything’s going to plan, right? Maybe, maybe not. To ensure targeted ad efforts are paying dividends, it’s critical to define key performance metrics and regularly measure these metrics to ensure ads are living up to expectations. For example, you could measure the total value of conversions against the cost of a targeted marketing campaign to see if the numbers add up.

The takeaway: Track the numbers to make sure ad spend makes sense.

It’s one thing to read about best practices — it’s another to see them in action. To help you visualize what effective ad targeting looks like, we’ve collected seven great examples. 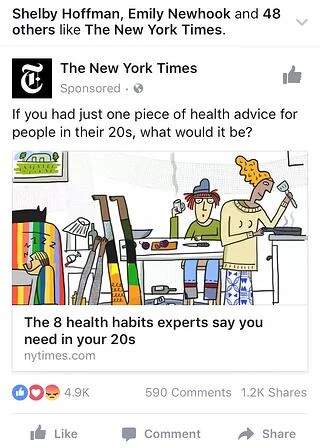 This ad works because it targets a specific audience segment — those in their 20s — and offers actionable advice for their health. Sure, there’s part of that segment that won’t respond because they’re not worried about health habits, but those that do click through are primed to engage with the targeted content being served.

And while the Facebook reactions show a number of “mad” faces, this isn’t necessarily a downside, since it indicates the ad is prompting user interest. 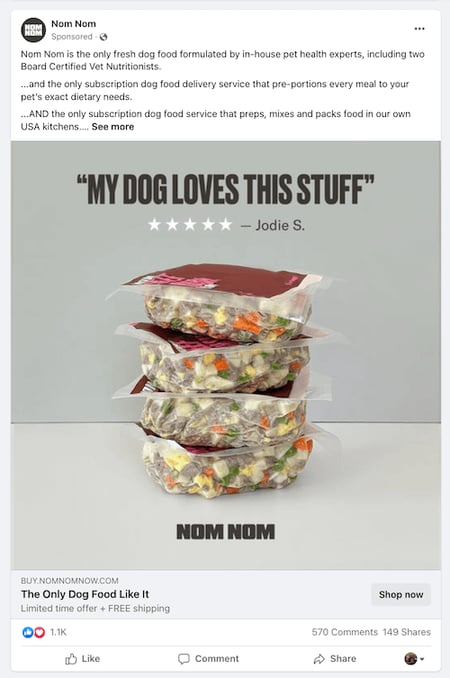 This ad targets a high-spending group: Pet owners. It also incorporates a customer testimonial to help convince viewers that it’s worth clicking through to find out what’s being offered.

It’s also worth noting the tagline in the bottom-left of the ad — “the only dog food like it”. This is a big claim to make but has a good chance of capturing targeted audience interest. And if the claim is backed up when they click through, there’s a solid chance of conversion. 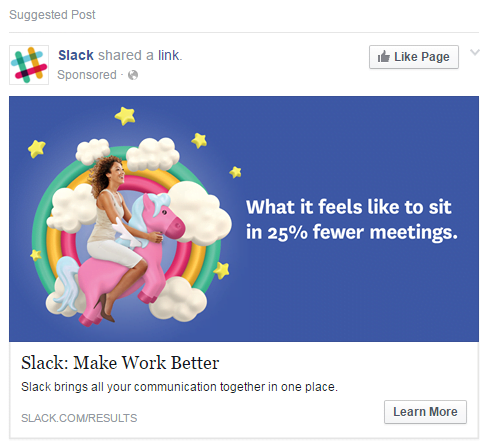 Pandemic pressures have made it clear that companies need to find better ways of doing work. One of the biggest productivity killers? Meetings. That’s why this targeted Slack ad works — the campaign offers the potential of 25% fewer meetings by making communication better across the company. While this kind of ad requires business decision-makers to get on board, if enough staff see and mention the ad it can generate significant corporate traction. 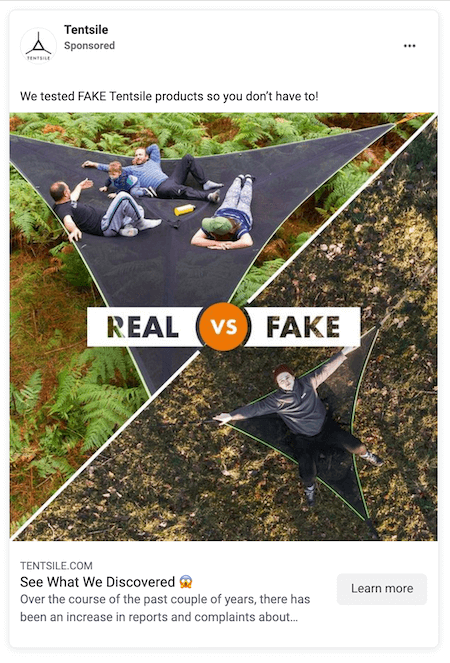 Who knew that tree tents and tree hammocks were a thing? Probably not most people. That’s the genius of this ad — while it targets a smaller segment of the market looking for the “best” tree hammocks, it also casts a wider net by introducing a larger group of users to the concept of above-ground tent products.

Even better, it promises a look into “real vs. fake” products, giving visitors a chance to see what the difference is by clicking through.

Saying that something doesn’t work in an ad is a risky bet — unless you can back it up. That’s the idea behind this 360Learning ad, which claims that Netflix-style “binge” learning can’t address the current issues with remote and online learning.

The promise of an eBook is a good way to get users to click through, and so long as there’s actionable information available it’s a solid start on customer engagement that could lead to more sales.

The image above is enough to give an idea of what’s going on — the dog is bringing a piece of jewelry to its owner, courtesy of their partner. The actual Facebook ad itself is a video that shows the owner happily receiving the gift and does a good job of conveying a sense of love, family, and connection.

Perhaps even more importantly, however, is that no other context is needed to understand the video. There’s no text aside from the Kay logo and tagline, and no sound is required to parse what’s happening. Here, emotions are the target and the ad hits home. 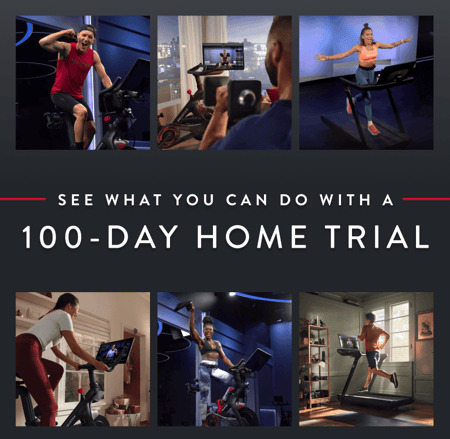 Peloton had a banner year in 2020, but as pandemic pressures begin to ease the interactive bike manufacturer is experiencing a slowdown in growth. This targeted ad speaks to those interested in the bike but daunted by its high price tag.

By offering a 100-day home trial with the option to return the bike for a full refund at the end of the trial, Peloton is looking to capture and convert a historically hesitant section of its audience by giving them the chance to experience the product risk-free.

Not every ad will land exactly as expected with your audience. But with targeted ad efforts that follow best practices and keep in mind the key rule of ad targeting — give the customer what they want — it’s possible to avoid criticisms of “creepy”, capture customer attention, and drive increased conversions.

Editor’s note: This post was originally published in July 2011 and has been updated for comprehensiveness.